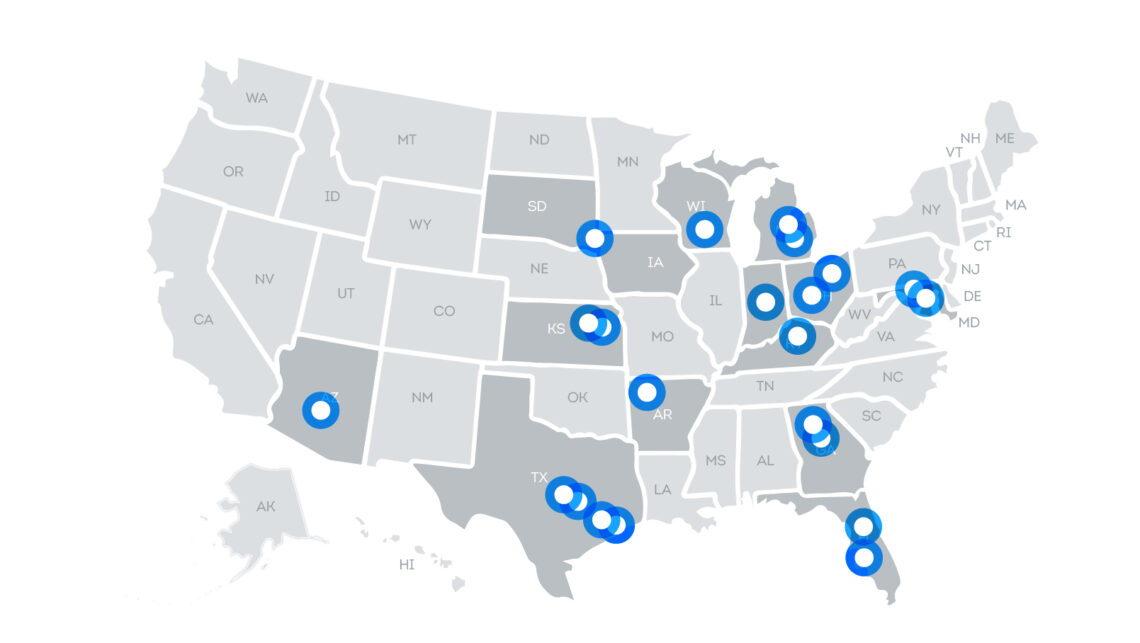 Epcon Franchising is pleased to announce the addition of 22 new Franchise Home Builders so far this year. These new Franchise Builders will build their first Epcon communities in 14 different states.

The new Epcon Franchise Builders are:

Kelly Construction, Sioux City, Iowa and Sioux Falls, South Dakota: Kelly Construction has been in real estate for 20 years, having built a number of single-family homes and two townhome communities. They have also been involved in historic renovation and commercial development.

Marquez Enterprises, Kansas City, Kansas: Over the last 10 years, Marquez Enterprises has grown a sizeable portfolio of rentals and residential rehabs and is currently working through a 60-unit project of new construction attainable housing.

Baig Development, Detroit, Michigan: Baig Development has a long family history of homebuilding prior to immigration to the United States from Pakistan. They have vast experience in both small business operations as well as the real estate market.

Minico Group Communities, Detroit, Michigan: Minico Group is led by Dominic Torres, a self-employed general contractor and custom builder. They are searching for an Epcon project in the areas of Oakland and Macomb Counties north of downtown Detroit.

Atteberry Homes, Kansas City, Kansas: Led by Paul, Mary and Ethan Atteberry, Atteberry Homes is a net zero energy home builder in the Kansas City market. They are working to secure their first Epcon project location in the south of Kansas City on both sides of the state line.

Lewis Patrick, Atlanta, Georgia: Lewis Patrick LLC of Georgia is a partnership between Joe Wilson and Raymond Sams. Ray has been an entrepreneur in the Atlanta area for many years and Joe comes from a sales background. They are working to identify a first project location in Cobb County.

Ryan Barrett Homes, Houston, Texas: Ryan Barret Homes is equally owned by Greg Stessel, Vicki Stessel and George Kawaja. They have worked together since the mid-80’s and have built thousands of homes during their careers. They are excited to be back in production building with Epcon.

Daugherty, Indianapolis, Indiana: Eric and Trisha Daugherty of Daugherty, Inc. have purchased, renovated and sold over 50 homes, and have also owned other franchise businesses in the past. They are ready to take the next step in their business with a 55+ project.

Great Places, Northern Kentucky: Great Places LLC is a partnership of Dave Noll, Matt Tobler, Dave Neff and Larry Ruehl, who have all done commercial contracting, multi-family development and scattered custom building in recent years. They will reintroduce Epcon to areas of the Cincinnati market south of the Ohio River.

Dominion Capital, Atlanta, Georgia: Phil Butler, a successful entrepreneur in financial services, will be taking lead of Dominion Capital and will have two other partners, Waldron McCritty, an entrepreneur himself as well as a developer, and Don Norwood, who is experienced in real estate investing and rehabbing.

Perrino Lifestyles, Avon, Ohio: Pat Perrino has been in the homebuilding industry for over 30 years, all based in Cleveland, Ohio and surrounding areas. His son, Tony Perrino, owns three businesses and was a superintendent for his father directly out of high school. Both look forward to the Epcon opportunity.

Lake Pointe Development, Houston, Texas: Mohammed Jamil is an investor and multi-unit franchise owner, currently working with a Houston builder/developer to build townhomes and patio homes. He is seeking to operate at a larger scale and provide opportunity outside of the Houston loop.

Valerian Homes, Phoenix, Arizona: Valerian Homes is led by Ana Burciaga Anaya and Miguel Torres Pompa. Miguel started a home flipping career in 2010 and has recently started with new builds, building around three homes per year. He has aspirations to become a full-time developer and builder.

Learn how you can become an Epcon Franchise Home Builder.