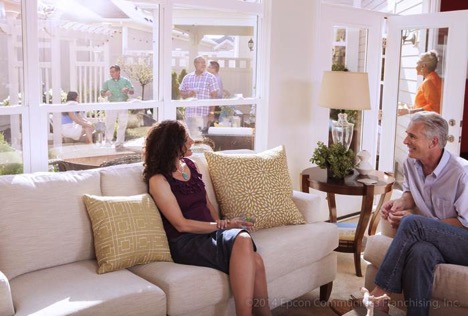 Epcon Communities celebrated a milestone year by hosting its 2016 National Franchise Builders Conference on February 8-10 in Columbus Ohio, where founders Ed Bacome and Phil Fankhauser started it all. Epcon marked its 30th anniversary in the residential housing market and 20th anniversary in franchising residential communities by honoring its outstanding home builders and sales specialists from across the country.

Douglas added that Melanie brings to life the essence of Epcon’s intentions for its homebuyers — to offer a fulfilling, happy lifestyle. “The community wouldn’t be what it is today if it wasn’t for Melanie,” she said.

Nye said co-workers refer to her as “the glue”, and she takes great joy in the nurturer role. “It’s in the air I breathe,” she said.

Nye moved to the Charleston area four years ago with her husband. She said they immediately fell in love with Marrington at Cobblestone, which she calls “the hidden gem of the Charleston area.” After two years as a resident, she said that her social involvement in the community created a passion for her to become an Epcon sales specialist. “It’s that emotional touch we talk about so often in housing sales.”

Nye is neighbors with her parents who own the other half of a duplex in Marrington. She said since her father passed away, it has been a blessing to have her mom close and part of the community.

“Life doesn’t get any better than this,” she said with a smile. Everything Nye wants and enjoys is in one community — a career that fulfills her and easy living shared with great community friends and family.

Franchise Builders use Epcon’s home plans, systems and support to efficiently build and sell homes. Together, Epcon and its Franchise Builders have sold more than 28,000 low-maintenance, high quality ranch style homes across 28 states. In addition to the Lifestyle Ambassador Award, Epcon also celebrated home builders, sales specialists, and superintendents who have led the way in developing Epcon communities nationwide.

The Tabb Smith Award was given to Adam Beach of Covenant Developments, an Epcon Franchise Builder operating in western Michigan. The award is given to a construction project manager/superintendent who exemplifies the spirit of Epcon’s Construction Manager Tabb Smith, who passed away in 2003. His leadership, professionalism, teamwork and commitment to detail continue to inspire the organization through this honorary award.

Most Non-Contingent Sales: Mary Lynn Knowles of Epcon Communities, was recognized for closing 54 contracts in 2015. This is her first year in new sales with Epcon Communities and she had never sold a new home previously.

Most Homes Under Construction by a Superintendent: Chris Michael, with Epcon Communities in the Charlotte area, managed more than 50 homes at one time.